Cano Cristales is one of the greatest rivers in the world, referred to by many names such as “river of five colors”, “rainbow river” or “river originates from heaven” and "the most beautiful river in the world." 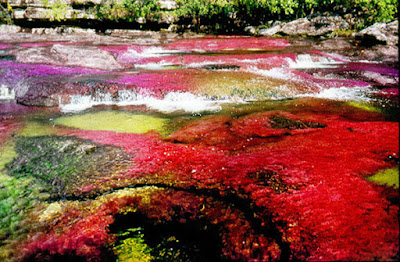 Cano Cristales is a river in Colombia, located in the national park Serrania de la Macarena. This is the river brings unique biological features, covered by a colorful algae.

The river is normally nothing much different than other rivers, a bed of rocks covered in dull green that one can see clearly beneath the riverbed.

However, in a short period of time given in the year, particularly during  the short span between the wet and dry seasons when the water level is stable, a river of colorful explosion of algae proliferate turns a brilliant red. It is offset by splotches of yellow and green sand, blue water, and a thousand shades in between. 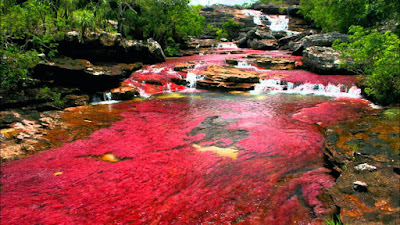 River flow regulation to the amount of sunlight the algae and in the rainy season, it keeps the sun’s rays down to the bottom of the river, in the dry season, the water level is too shallow difficult to sustain the lives of aquatic species characteristics especially algae, moss. But the interference between wet and dry seasons are the ideal conditions for life in the river development Cano Cristales.

During this time, the entire riverbed is covered by a variety of different colors, blue, green, red, yellow and other colors countless cups in the middle of the main colors.

But there is a pity that this colorful miracle lasted only a few days between rainy season and dry season. Grasp wonderful views can only track weather rule between the two seasons.

For years, the attractions were closed to tourists because of military operations in the region, along with concerns about the impacts of tourism traffic is not controlled. But by 2009, the area was reopened to visitors and today there are several travel agencies Colombia opens flights bringing tourists to La Macarena. 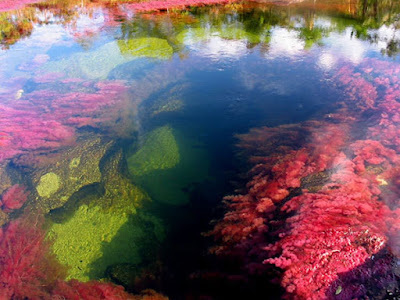 From the city of La Macarena, visitors can choose for themselves the various moves such as horseback riding, donkey or on foot with the help of tour guide for visitors to access national parks Serrania de la Macarena, where the river is hidden Cano Cristales, 20m wide and 100m long.

There are tourists only visit the day but not allowed to stay overnight or cook anything. This park specifically prohibits noise as well as litter in any form.
Được đăng bởi visa vào lúc 1:50:00 AM