Travelling China to discover the mausoleum of Qin Shi Huang

Located at the northern foot of Lishan Mountain, 35 kilometers northeast of Xi'an, Shaanxi Province, Mausoleum of Qin Shi Huang is one of the greatest archaeological discoveries of the world.

The Tomb is  Buried deep under a hill in central China, surrounded by an underground moat of poisonous mercury. It was discovered in 1974, by local farmers when a  digs a well and found a clay head. At that time, archaeologists began the excavation and discovered this monumental tomb. 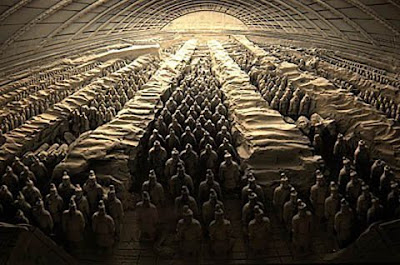 Given what we know, this excavation was conducted from the 70s, so far, they've uncovered about 2,000 clay soldiers, but experts estimate there are more than 8,000 in total.

A museum has been built near the area excavated in 1975 and opened to the public on  2010, exhibiting the unearthed antiquities for visitors to admire,  including terra-cotta warriors, wooden chariot, weapons and horse skeletons...

The special thing here is that there are thousands of soldiers are molded earthenware, but all the faces of the soldiers are completely different, from facial expressions to the eyelids, ears, etc. Up to now, the scientists have yet to figure out the reason and manual to create such flawless terracotta statues.
Được đăng bởi visa vào lúc 9:37:00 PM