Visiting the places which are real in the novel Jin Yong

Mount Hua Sect
Huashan Sect was originally the most powerful of the five allied sects and appears repeatedly in the novels of Jin Yong, often referred with Mount Hua swordsmanship. Jin Yong has turned Hua Shan into a powerful place in the world of martial Central Highlands when describe it as a mountain to the masters of Kung Fu come to compete, win the throne "King of Kung fu".

Hua Shan  is located in Huayin city, on the outskirt of Xi'an, Shaanxi Province, with five main mountains, in which, East Peak is the best place to enjoy the sunrise, West Peak is the most elegant; North Peak is famous as the Cloud Terrace Peak and Middle Peak is also called Jade Lady Peak, the highest mountain (2154.9 m) is South Peak (in the south), also known as Layan. 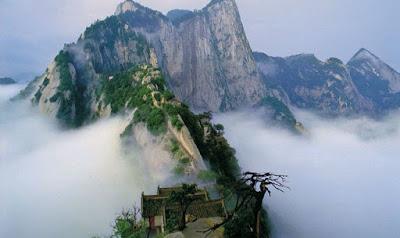 A scene in Hua Shan at early morning​

Hua Mountain is well-known for its sheer cliffs and plunging ravines. It is known as "the most precipitous mountain under heaven" and is probably the most dangerous mountain in the world frequented by hikers.

Maybe due to the rugged terrain, Hua Shan is martial competing place to select the King of Zhongyuan, because only the profound martial art people can overcome these craggy mountains to stand on the the summit.

It is made up of granite which allows the formation of very steep slopes that characterize the mountains, with upright shape and wide spread like a flower should be named Hua Shan (Flower Mountain). The main top of Mount Hua is up to 2.083m high.

Mount Tai Sect
Mount Tai sect is affiliated to Taoism and not "renowned sect", but Mount Tai in real life is a famous tourist destination throughout the world.

Mount Tai, located just north of Tai'an city in Shandong province,  is a mountain of historical and cultural significance, includes many majestic mountains, including the Jade Emperor Peak at the height of 1.545m above the sea. So, the ancient called this mountain is "pillar propping sky". 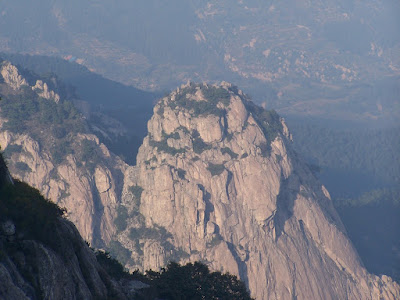 The mountain was once called Mt. Daishan, Mt. Daizong or Mt. Taiyue and was renamed Mt. Taishan in the Spring and Autumn Period (770BC-476BC), and is considered one of the five sacred mountains of China, next to Hua Shan, Mountain, Mount Heng. Tai mountain is often likened to the dawn, the birth and rebirth, so is considered the most sacred place in the 5 mountains. 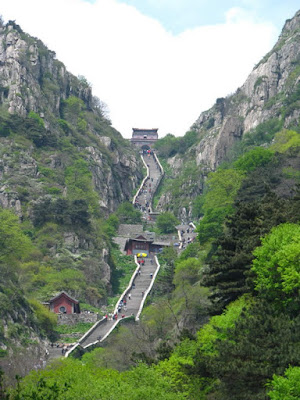 Besides monuments, temples and pagodas, Mount Tai has many precious natural heritages and unique natural scenery, The lofty peaks, deep valleys, spectacular waterfalls, enchanting rocks and the centuries-old pines; especially the maidenhair tree in the temple has dating 2,000 years old and was dubbed "living fossils". In addition, the stone bridge is formed after the mountain avalanche, called "immortal bridge" is also a very attractive landmarks at this mountain.

The most interesting impressions when coming to Mount Tai are Sunrises from the East, the Sunset Glow, the Sea of Clouds and the Golden Belt along the Yellow River. When the sun rose, the clouds fly on the mountain covered over and turned this mountain into a "Heaven".
Được đăng bởi visa vào lúc 9:35:00 PM