Home » China » Place » Dunhuang, the island in the middle of arid desert in China

Dunhuang, the island in the middle of arid desert in China

Located on the Silk Road, Dunhuang is the most important trade point between the eastern and western, located at the western end of the Gansu (Hexi) Corridor and at the eastern end of the Taklamakan Desert. China is pouring billions of dollars to revive this famous road.

Located about 6km south of the city of Dunhuang in north west China, Crescent Lake have an estimated age of 2,000 years, it is an oasis Gobi desert, which is surrounded the numerous sand dunes, most has been ravaged by desertification. For centuries, this place is likened to a lake in the desert, or the lovely mouth of a beautiful woman because having semicircle. Although surrounded it is an arid desert ranges, there is a land where trees still grow normally and have an extremely cool lake.

Every year, this place still occurs phenomena such as sunny, rain, and season change as in other lands; only wide in more than 1km2 and located in the desert with temperatures over 40, this place is setting a big question mark for the scientists .

Besides oasis, there is huge sandy grassland called Ming Sa in here meaning "singing sands". It is rumored that the singing of the sand in the Gobi Desert is to haunt traders on the Silk Road. Along the side of the Crescent Lake is a pagoda in traditional Han Chinese architecture. A street lined with souvenir stalls leads up from the entrance to the complex. 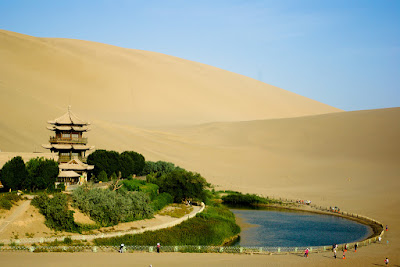 Crescent Lake, a small lake in the heart of the desert​

Gobi is Asia's largest desert. Chinese people often call it Endless Sea. It covers parts of northern and northwestern China, and of southern Mongolia. Being an oasis town, Dunhuang is a lonely green island between the arid sand place. However, the Gobi desert has a very varied terrain, depending on the climate of each region.

Legend has it that there was a monk named Le Zun. One night, in the year 366 AD, the monk saw thousands of Buddha shining in the sky Ming Sa. Then, he made a temple with golden Buddha statue at the cliff on the river. Later, another monk named Fa Liang visited Dunhuang and he started the caves construction work that spanned ten dynasties. Mogao Caves are commonly known as the Caves of a Thousand Buddhas. Within a few decades, 70 caves were carved in Mogao, are a magnificent treasure trove of Buddhist art 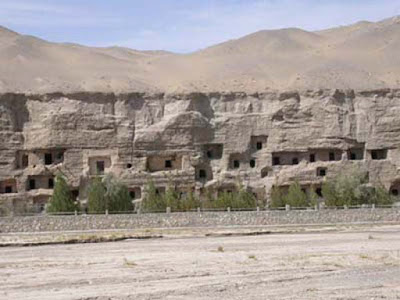 Experiencing 1,000 years, There are about 600 surviving cave temples, of which 30 are open to the public. This is a World Heritage Site protected by UNESCO and attracts a lot of tourists. The progress on the architecture of the Mogao caves reflects influences from China and the western region. Many caves were renovated in later dynasties.

For the monks Mogao, the visual art has an important role in the propagation of religious doctrine. To create these frescoes, one must pour 3 layers of plaster onto a flat wall to paint.

Nowadays, There are around 2,400 surviving clay sculptures at Mogao, many statues are restored from the Qing Dynasty. In the previous dynasties, the back of the statue is mounted on the wall, head part is made separately, then put on the body. Till the Tang Dynasty, the statues were completely separated.

In the Tang Dynasty, there are two huge Buddha statues built here, reflecting the strength and idolatry of the empire at that time.

Caves from the Tang Dynasty are considered the pinnacle of Mogao. Unlike the statues from the previous dynasties, the separate statue of this Dynasty can be admired from all sides. Brilliant color and crisp detail from costumes of statues also reflect a prosperous life of the monks at that time.
Được đăng bởi visa vào lúc 9:30:00 PM