Many visitors will surely feel hard to swallow, but actually fermented skate and fried silkworm larvae are the favorite foods of many South Koreans. 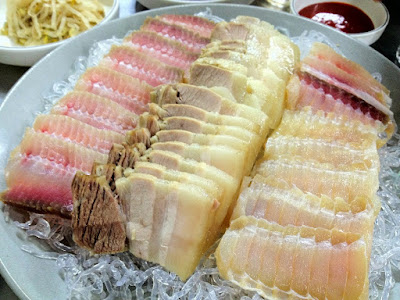 Fermented skate is an expensive Korean delicacy, which has been described as eating rotten fish, most popular in the southern parts of the country. Skates caught from the sea are not immediate consumption which is often frozen in the freezer, Skate doesn’t urinate like other fish – it passes its uric acid through its skin. When it is fermented, the uric acid breaks down into a compound which smells exactly like ammonia, the skates are ready to be taken out, sliced up and served raw.
Due to the strong smell you’re supposed to eat it with a piece of kimchi and bossam. 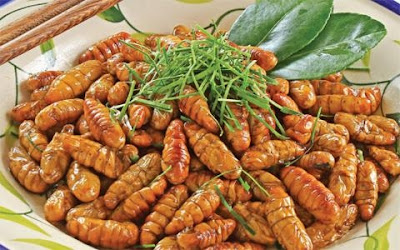 Silkworm larvaefried with lime leaves, a favorite dish of Koreans​

Beondegi (the boiled or steamed silkworm chrysalis) are a popular snack food in Korean cuisine. However, not all visitors liked it because of the bizarre shape and pungent of silkworm larvae.

Beondegi is a good source of protein, but most Korean adults find eating beondegi more of a nostalgic purposes than a nutritional source
Được đăng bởi visa vào lúc 12:59:00 AM