Exploring the mysterious legend of the Great Wall

The Great Wall of China is one of the greatest wonders of the world. Many stories and legends about this enigmatic work have formed in the process of building and handed down through many dynasties. These legends have attracted many tourists to visit the world's longest wall.

Lady Meng Jiang find husband
This Great Wall story happened during the Qin Dynasty (221BC-206BC). One spring, Meng sowed a seed of bottle gourd in his yard. The bottle gourd grew up bit by bit and its vines climbed over the wall and entered his neighbor Jiang's yard. Like Meng, Jiang had no children and so he became very fond of the plant. He watered and took care of the plant. With tender care of both men, the plant grew bigger and bigger and gave a beautiful bottle gourd in autumn. Jiang plucked it off the vine, and the two old men decided to cut the gourd and divide it by half. To their surprise when they cut the gourd a pretty and lovely girl was lying inside! They felt happy to have a child and both loved her very much, so they decided to bring the child up together. They named the girl Meng Jiangnu, which means Meng and Jiang's daughter.

As time went by, the little girl grew up and became a beautiful young woman. She was very smart and industrious. She took care of old Meng and Jiang's families, washing the clothes and doing the house work. People knew that Meng Jiangnu was a good girl and liked her very much. One day while playing in the yard, she saw a young man hiding in the garden. She called out to her parents, and the young man came out.

At that time, Emperor Qin Shihuang (the first emperor of Qin) announced to build the Great Wall. So lots of men were caught by the federal officials. Fan Qiliang was an intellectual man and very afraid of being caught, so he went to Meng's house to hide from the officials. Meng and Jiang liked this good-looking, honest, and good-mannered young man. They decided to wed their daughter to him. The two young people accepted happily, and got married several days later. However, three days after their marriage, officials suddenly broke in and took Fan Qiliang away to build the wall in the north of China. Qi Liang, husband of Lady Meng Jiang, was forced to construct Great Wall. At winter, she knit for her husband a shirt and fined him to give it. 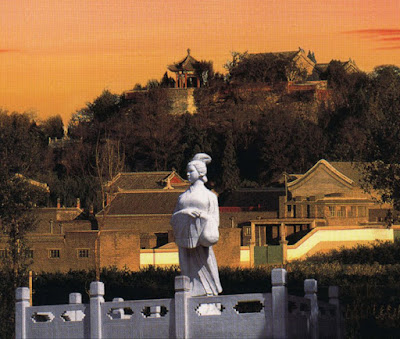 She sewed warm clothes for her husband and decided to set off to look for him. Saying farewell to her parents, she packed her luggage and started her long journey. She climbed over mountains and went through the rivers. She walked day and night, slipping and falling many times, but finally she reached the foot of the Great Wall at the present Shanhaiguan Pass

Lady Meng Jiang traveled along the length of the Great Wall, asked many people and finally knew the bad news of her husband that he dead under the Great Wall. She wept bitterly 3 days and 3 nights, tears mixed with blood. Her cry is sonorous 800 miles of Great Wall, collapsing of a part of the Wall revealing her husband's corpse. After finished the funeral for her husband jumped into the sea to commit suicide. Today, at Shanhai County, Hebei Province have shrines Lady Meng Jiang. This story has been told in books, folk songs and traditional plays. Almost Chinese people know this story.

Jiayu Pass
Jiayu Pass was built in 1372 under the supervision of Feng Sheng, a founding general of the Ming Dynasty. The legend of Jiayu Pass telling about a man named Yi Kaizhan in the Ming Dynasty (1368-1644), he was very good at arithmetic, he was very good at arithmetic. He calculated that they would need 99,999 bricks to build the Jiayu Pass. The manager did not believe him and said that if he miscalculated even one brick, workers would have to labor for three years.

When completed the gate, a brick was remnant and the manager was very excited, ready to punish them. However, Kaizhan said that this brick is placed there by the arrangement of gods, just a little shifting will make the wall fall down; the manager did not believe and took it away, the wall had collapsed and must to rebuild. After rebuilding, another brick was left alone; and today it is still in the tower of Jiayuguan. Another version tell that Yi Kaizhan calculated exactly the number of bricks needed but added a brick according to the say of manager.

Covering an area of 40,100 square yards (33,529 square meters), Jiayuguan Pass of Great Wall has a complex and integrated defensive system: an inner city, the central area with many buildings, an outer city, and finally a moat. You can also find common military facilities such as arrow towers, turrets, and cannons along the wall.

Different from sections built with stone and gray bricks in other regions like Beijing and Hebei, packed earth was the major material used to construct the ramparts of Jiayu Pass, making yellow the dominant hue. This helps the pass blend harmoniously with the surrounding desert. 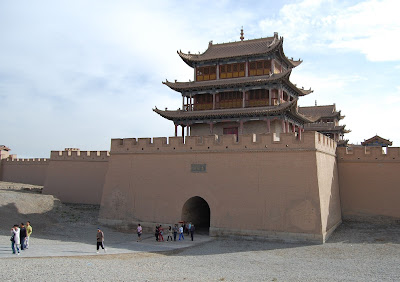 Jiayu Pass where legend told that used 99,999 bricks to build​

Legend of Ly Son monument
This story took place during the Western Zhou (1122-711 BC). King Chu has a Queen called Bao Si, a nymph with heavenly beauty. King Zhou very favored her, but Sacks Self never smiled.

A functionary said that the burning of Ly Son may cause people to panic and make the queen to laugh. King Chu liked that idea. She smiled when she saw the vassals were tricked ( At that time, once the signal fire was ignited, it showed that other tribes attacked the city, and all the vassals around would come to help). Then, when the enemy invaded the Western Zhou, King Zhou burned monument to ask the help but no vassals came because they've been fooled once. The king had been killed by enemy soldiers and Western Zhou collapsed.

The Fortress Xifeng Kou
There is a fortress on the Great Wall originally named, the Xifeng Kou, or the Happy Meeting Fortress. There is story of how the name of the fortress came about

The Great Wall required soldiers to be on guard at the place all year round. That makes not only themselves but their families and their lovers also are sad. A young soldier had protected the northern territory of China along the Great Wall for many years without leave. The army prohibited anybody from leaving his duty. The young man had a father as his only family member. He only had a elderly father living alone at home.

The father was very old and was afraid that would never see his child. Therefore, he had come to the region of doing the task to meet his son, may be the last time. Coming to fortress, he accidentally saw his son. He also realized him, two people hugging, laughing and crying. Surprise is both died on this spot.  In order to remember the loving father and son, the fortress where they met was named Xifeng Kou. They represent thousands of soldiers and their families.

Yellow Flower City
About 60 km north of downtown Beijing, a Great Wall section is named Huang Hua Cheng, the reason is that that during summer, the countryside around Huanghuacheng Great Wall is swathed in yellow, as masses of wild flowers come into bloom. It is almost 11 kilometers long and joins with Mutianyu Great Wall in the east, and JuyongguanPass and Badaling in the west.

Huang Hua Cheng began to be built in 1575 in the Ming Dynasty and led by General Cai Kai. It was said that it took many years to finish the construction. When Minister Cai Kai back to the city to report to the emperor, some courtiers has told to the emperor that the minister Cai Kai spend too much money and the quality of the wall is very bad. Angry emperor ordered to dispatch Minister Cai immediately. 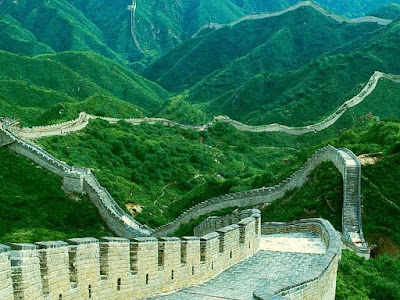 Great Wall was built on the tops of the mountains​

Sometime later, the emperor sent sent a trusted aid to check Cai’s Wall. That person reported that the wall is very robust and built elaborately. Regretting was too hasty caused the death of General Cai, emperor built a tomb and monument to commemorate the loyal general. Emperor also wrote the word "Jin Tang" (this word means "Golden Road", is the strong, enduring) and ordered carving up a large rock at the foot of fortress. Therefore, this section is also known as the Golden City
Được đăng bởi visa vào lúc 9:09:00 PM