Ganxi Dong  is home to the Dong people, hidden deep in mountain Tianzhu in central China. Belonging to one of the 56 ethnic minorities of this country,everyone who lives there is a martial arts expert. However, each one pursues a different style of this ancient martial art. They use  just fists to sticks and pitchforks to strike and defend themselves.

A verdant village with few traditional huts nestled on the mountainside became the characteristic image of Ganxi Dong when be widely shared on Chinese media. The picturesque backdrop became location of practicing kung fu perfect  and fighting each other for people at different ages.

There are  two theories given by local people when explaining about the appearance of this martial art in the village. Some said that previously, the villagers and their livestock were regularly attacked by wild beasts. As a solution, the healthy young man in the village was chosen from each family to learn martial. 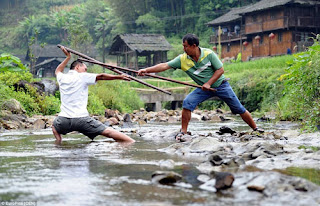 A posture practiced by people here in every morning​

These young men the moves mimicking dragons, snakes, tigers and leopards, and teach skills for other family members. Every family specialised and trained  in a different style creating many kung fu sects.

Another story has it that when the first family settled here,  they were frequently pillaged by their neighbors. So they invited couple of martial arts experts to teach them how to protect themselves. They learned new skills and retransmitted for people in the village. 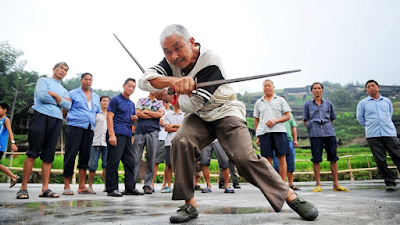