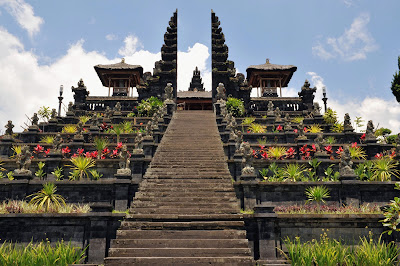 Besakih Temple, known as Bali’s ‘Mother Temple’ in the village of Besakih on the slopes of Mount Agung in eastern Bali , is an artistic and unique complex that comprises at least 86 temples which include the main Pura Penataran Agung and 18 others.

Besakih is the biggest and holiest of the island's temples, built on six levels, terraced up the slope and is surrounded by breathtaking and scenic rice paddies, hills, mountains, streams, and more. 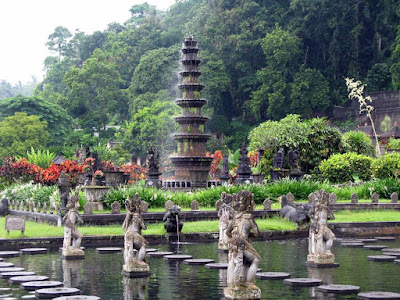 Tanah Lot Temple is a Hindu temple, one of seven sea temples around the Balinese coast and has a stunning natural beauty. It is situated on a large coral rock overlooking to the Indian Ocean and built to worship the God. 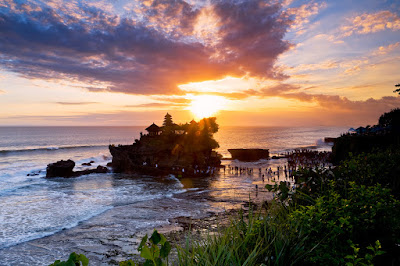 This temple is very famous among tourist destinations in Bali with spectacular view at sunset time. At some nooks of coral reef around Tanah Lot Temple there are poisonous sea snakes are believed to guard the temple from evil spirits and intruders. 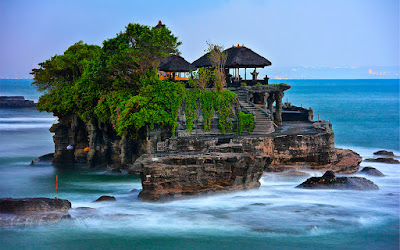 Pura Tirta Empul
Tampak Siring is also known as Tirtha Empul, is a holy springs water temple located in a valley between two hills with big springs and sacred in village Manukaya in central Bali. 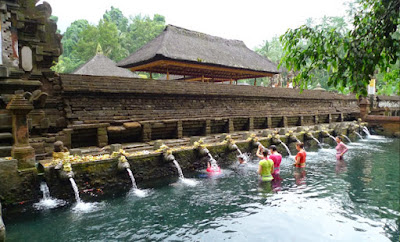 Ulun Danu Bratan Temple
Pura Ulun Danu Bratan is an important water temple on the shores of Danau Bratan (Lake Bratan). Built by the King of Mengwi in 1633 in worship of the main Hindu trinity, Brahma-Vishnu-Shiva, as well as the lake goddess, Dewi Danu 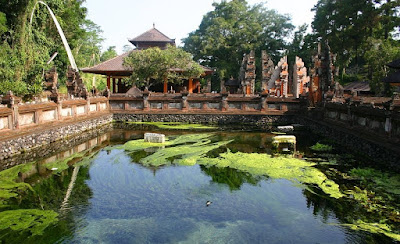 Set in the Bedugul Highlands, 1,239 meters (feet) above sea level, Pura Ulun Danu Bratan is one of Bali’s most photographed and iconic temples.

The ‘floating’ temple complex is comprised of four groups of shrines, including the prominent Lingga Petak shrine to its east. There are four gates facing each of the four points of the compass. The second group is located in the west and pays homage to another temple in the hill of Puncak Mangu and is regarded as the symbol of soil fertility. The ‘puncak’ or hilltop of Mangu is northeast of Lake Beratan.

Goa Lawah Temple (Bat Cave Temple)
Goa Lawah Temple located along the coast of southeastern Bali just west of Candidasa. The center of the temple is built around a nature cave dwelt by thousands of tail bat. Its entrances are guarded by a temple believed to be found by a sage nine centuries ago. 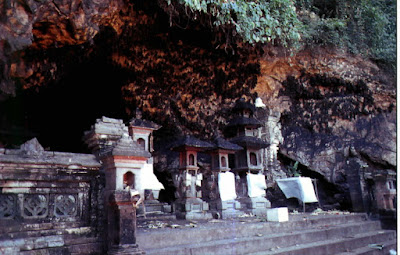 From the cave, it looks the beautiful black sandy beach, blue seas and there were also the beautiful of Nusa Penida Island.
Được đăng bởi visa vào lúc 1:38:00 AM