The unique beauty of Borobudur temple in Indonesia

Borobudur is located in central Java, was built by Sanmaratungga in between the end of the seventh. 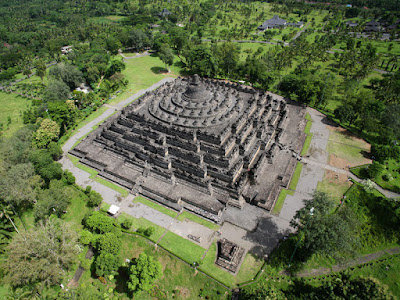 The main temple is a stupa built in three tiers around a hill, composed  a pyramidal base with five concentric square terraces, the trunk of a cone with three circular platforms and, at the top, a monumental stupa. The walls and balustrades are decorated with fine low reliefs, covering a total surface area of 2,520 m2. Around the circular platforms are 72 openwork stupas, each containing a statue of the Buddha.The whole structure is in the form of a lotus, the sacred flower of Buddha. 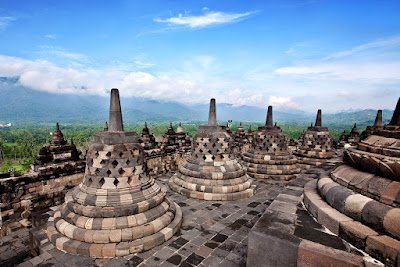 Architecture of Borobudur temple is very beautiful and firm​

Each tower storey has carved exquisitely describing the life of Buddha and earthly. The bas-reliefs runs along the corridor, describing the stages of human life when toward to perfection.

The Temple should also be seen as an outstanding dynastic monument of the Syailendra Dynasty that ruled Java for around five centuries until the 10th century. 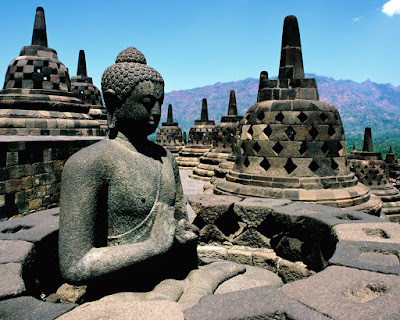 A Buddha statue sitting on the lotus inside temple

It could be said that Borobudur is a symbol of cosmic mountain covered by the sky roof, in which the world of man is no longer bounded by physical and worldly ancient desire. 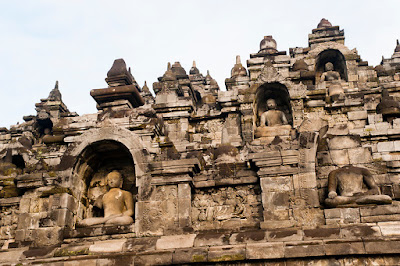 In Buddha's birthday celebration every year, many people come here to pilgrim and up the top the temple to admire space around, watching the huge green carpet stretching in front, drop lights and enjoy the pure atmosphere. The best time to explore the mysterious beauty and record impressive pictures of Borobudur is at dawn.