Enjoying the famous dish Bak Kut Teh in Singapore

Bah Kut Teh consists of meaty pork ribs simmered in a complex broth of herbs and spices such as garlic, cloves, cinnamon, star anise, fennel seeds and coriander. This dish is usually coupled with tea in a belief that tea will help dissolve large amount of fat in the soup. ​Bak Kut Teh had from the 19th century and is considered as a food of the Chinese workers of the Fujian province of China. 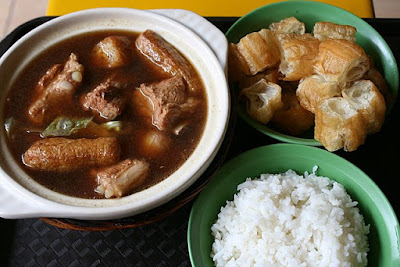 People used to have bak kut teh for breakfast, but it can be occurred in any dining table of any meals of the day, breakfast, lunch, dinner or supper.
Được đăng bởi visa vào lúc 2:26:00 AM